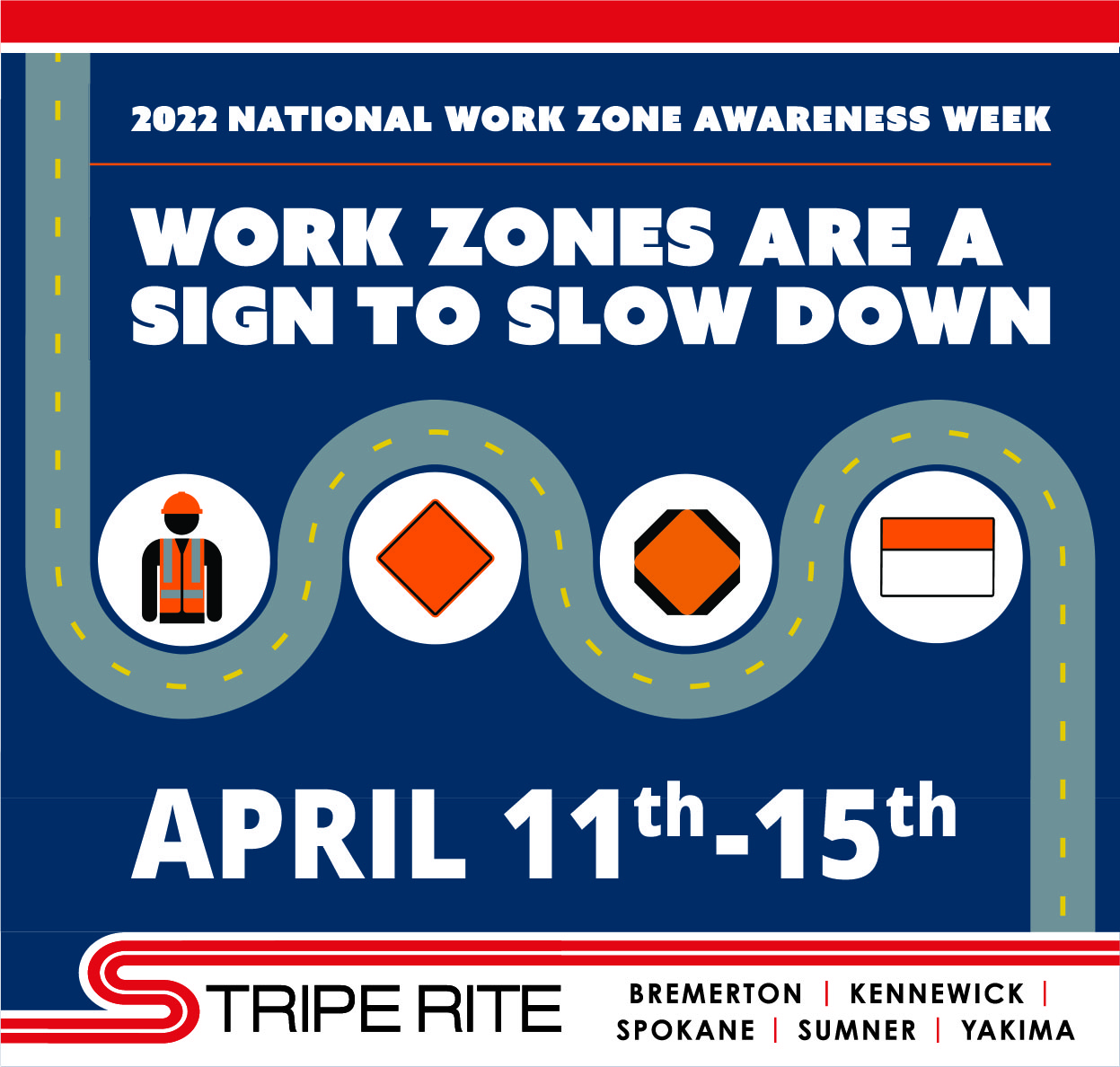 Stripe Rite would like to bring attention to the National Work Zone Awareness Week (also know as NWZAW). The week starts April 11th and lasts till the 15th.

The theme of this year’s National Work Zone Awareness Week is “Work zones are a sign to slow down”. Unfortunately, 762 fatal crashes occurred in work zones in 2019, and 135 roadway workers were killed. Join us in raising awareness of the importance of slowing your vehicle and staying alert as you pass by a work zone.

Visit www.striperite.com to find out more about Stripe Rite, and most importantly, Visit NWZAW.org for more more information on NWZAW.

How did NWZAW awareness get started?

In 1997, a group of Virginia Department of Transportation (also know as VDOT) staff members wanted to dedicate a week to raise awareness about work zone safety. Following the successful promotion of this first event, the idea of raising awareness to other DOTs was brought up. Officially, in 1999 the California Department of Transportation began its statewide public awareness campaign called “Slow for the Cone Zone.”

However, it was 1998 when VDOT first presented the idea to create a national campaign to ATSSA officials. In December of 1999, ATSSA approached the following groups. The Federal Highway Administration (also know as FHWA), and the American Association of State Highway Transportation Officials (also know as AASHTO). As a result, the first official NWZAW was launched. Thereafter, they developed an agreement between the organizations to outline goals for the NWZAW efforts.

Firstly, the goal was to initiate efforts to raise awareness for more caution when driving through work zones, most importantly decreasing fatalities and injuries. Secondly, to establish and promote a uniform set of safety tips. Thirdly, to show the value of training and the importance of best practices in regard to work zone safety. Training would be promoted among individuals in the private sector, industry, and roadway workers. Moreover, they wanted to reach out to both roadway workers and contractors to communicate possible effects of motorists’ behavior. Also, to advise on what steps could be taken to lessen negative behavior. Lastly, to make outreach efforts to work with entities involved with work zone safety, and to form partnerships. All these goals were met in creating NWZAW.

The first official NWZAW kick-off event was held in 2000 in Springfield, Va. The site where the kick-off event is held now alternates each year. State transportation departments can submit applications to host the event on those alternate years.